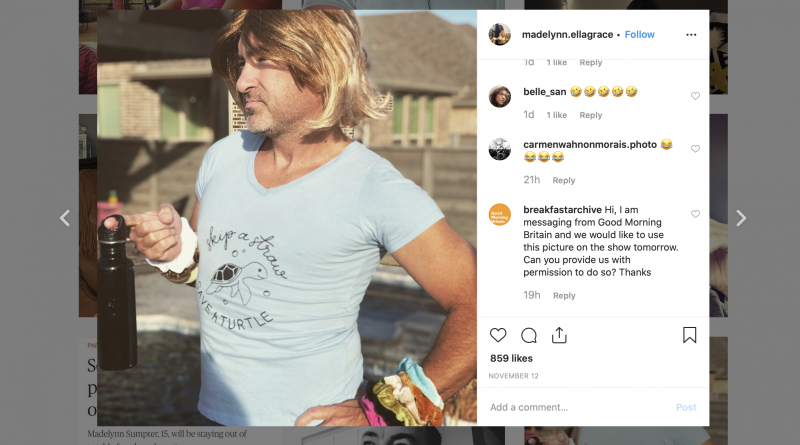 After Tawnya Ford and Larry Sumpter learned that their 15-year-old daughter, Madelynn, had helped sneak boys into a sleepover party, they gave her a choice of punishment.

A. One month without her phone

B. Two weeks without a phone and a parent social media takeover

She chose B and after 24 hours realized she chose wrong!

Since the takeover began on November 11, her dad has posted a number of videos on TikTok. In one clip, he is seen dancing around with his son-in-law in a pair of daisy dukes and a crop top. Another video shows the father of six channeling Kim Kardashian— complete with a padded behind.

On Instagram, Sumpter is seen gazing at the camera while laying in bed. “Felt cute,” he wrote. “Might delete later.” He also posted a video of running tips where he talks about his walkman and velcro shoes. Sumpter also has access to Snapchat and has built a big fan base with Madelynn’s classmates, who regularly check for updates. You can see some of the posts below and find the original story from Today.com.

Here’s a little clip of me getting warmed up for my morning run! #parenttakeover #makebetterchoices #followme #instagood #feelingcute #iamfast #running

Today should be the final day of Madelynn’s punishment!

TICKETS ARE SOLD OUT!
View Calendar